The Wello Penguin wave energy converter has hit another milestone and is celebrating its one-year anniversary of continues deployment in Orkney, Scotland.

The device was redeployed on the 5th of March 2017 after making some adjustments to the devices mooring system. The new mooring system is designed to withstand extremely rough ocean conditions and is more reliable than the previous iteration of the moorings. During this time both the moorings and the Penguin have been tested in some of the harshest ocean conditions experienced in years, proving both their survivability’s.  In October the Penguin was subjected to some of the biggest waves in decades when hurricane Ophelia ravaged the North Atlantic Ocean. During the storm the waves hit a height of 18 meters, some of the worst conditions any wave energy converter has ever been though. Throughout the storms the Penguin kept producing continuous, clean, renewable energy.

The Penguin was originally deployed in 2012 thanks to funding from the European Commission’s research and innovation programme, Clean Energy from Ocean Waves (CEFOW) research project coordinated by Fortum. Since it’s 2012 deployment deployment the Penguin has been using all its original components. With minimal maintenance to the hardware of the device the Penguin wave energy converter has proved its survivability in some of the harshest conditions the ocean has to offer.

The anniversary of continuous deployment is yet another milestone for the Penguin, having proved its survivability and longevity we are looking forward to breaking more records and many more years of continuous energy from the oceans waves. 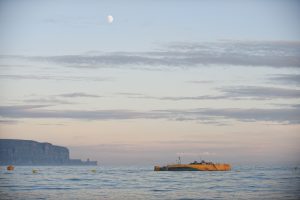